In every city and village that we visited,  we noticed a nightly progression.  In Italian, it is called la passegiata. Couples and families get dressed in their finest and walk around the main streets of town and through piazzas.  It is a time to see and to be seen and to socialize. I loved this time of night.  La passegiata usually occurs before dinner, between the hours of 5 and 8.  I saw couples, both old and young, families, and generations of families, strolling leisurely through town. My favorite memory was when I saw a couple walking through the marbled streets of Verona.   They were slowly pushing whom I assumed to be their elderly mother in a wheelchair.  Everyone was decked out, and it was sweet to see them leaning in, pointing things out along the way. The matriarch of this family happily looked around and soaked everything in, surrounded by love.

Love.  That is what Verona is and reminds me of. This fair city is infamously known for the setting in Shakespeare’s Romeo and Juliet. The Great Bard set a lot of his plays in Italy–The Two Gentlemen of Verona, The Merchant of Venice, and Winter’s Tale, all have scenes in this great country. So it is not surprising “In fair Verona where we lay our scene…” that this came to be a destination for tourists to connect with these two star-crossed lovers. There is a crowded atrium, where people go to visit “Juliet’s house”, which is not really her house at all, because uh…it’s fiction, and is really just a tourist trap. It is on Via Cappello, which I guess is close enough to Capulet. There is a balcony, but it was added to a medieval building in 1936.  Nevertheless, it looks like the balcony that Shakespeare describes in the play. As I looked up, I could imagine how the scene could have played out hundreds of years ago, with Romeo decked out in his medieval finest, standing, right where I was, while he called up to Juliet and implored her to come down.

Thousands of tourists flock to this area each year. There is even a bronze statue of Juliet in the center.  Tourists rub her left breast to bring good luck.  While I did not rub her breast,  I did write a note to her and placed it in a well in the atrium. The well and surrounding walls are full of notes and locks from people all over the world, professing their undying love. The note I wrote wished for my three teenagers to someday find true and soul-fulfilling, everlasting love.

Adding to the romance of this city is the location itself. A river runs through the city, and the setting is beautiful. 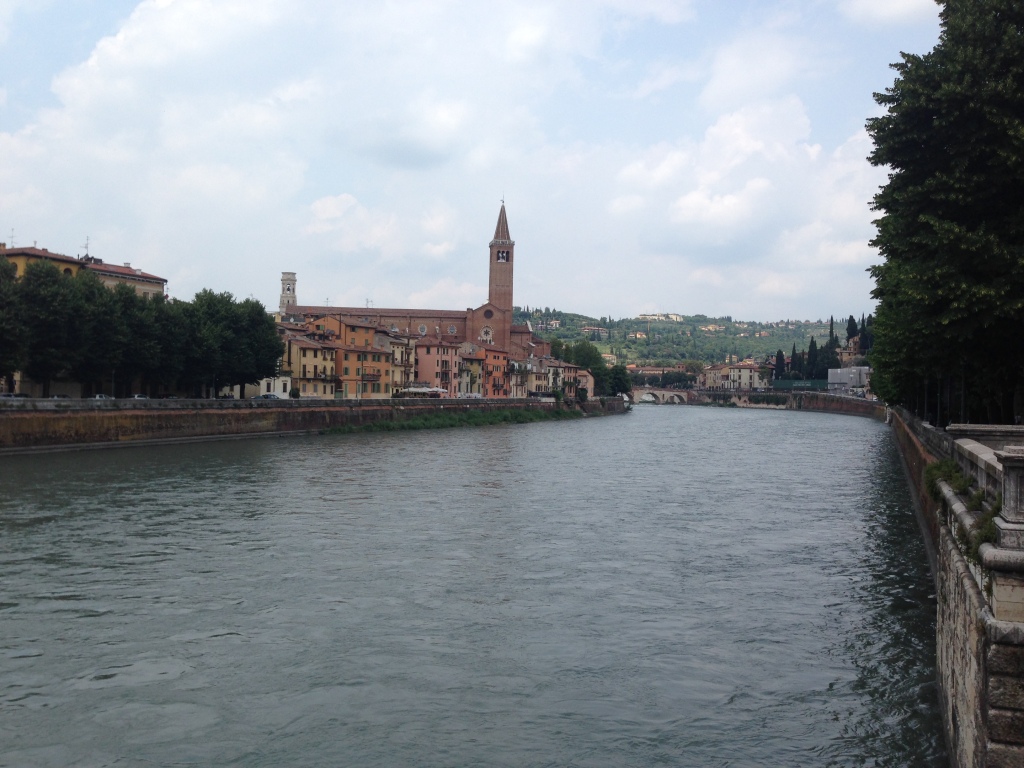 We were there on a Saturday, and saw brides and grooms, wedding parties and decked out cars. 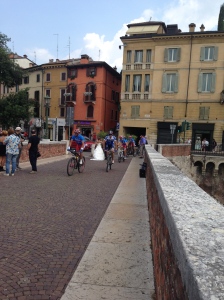 Verona’s main shopping  street and the street most crowded for shopping is Via Mazzini and really is paved in marble.  In contrast to the shops of Assisi, most of these shops are higher end; although, there are some affordable shops mixed in.  I loved wandering through this area, and I found some great clothes to bring back to my own brood at home.

Verona has some of the best piazzas in Italy.  The two main ones are Piazza Bra and Piazza Erbe. Piazza Bra, near the ruined amphitheater, attracts the elderly and families.

Piazza Erbe, around the corner from the marbled Via Mazzini, attracts the younger, hipper crowd, and has a really hot nightspot, evidenced by the crowds and music that spilled outside.

We could not leave Italy without having seen an opera, even though it really is not my cup of tea.   We went to see what it would be like, having found affordable nosebleed seats outside in an ancient Roman arena.

We sat high up, with the rest of the heathens,  where no dress code was required. I  looked down on the floor and squinted to see people dressed up in tuxedos and long gowns.

I was glad, though, to be on the stone steps, taking it all in from a bird’s eye view,  even though my butt was sore from sitting on ancient rock for over two hours.   Afterward we went across the way to a restaurant an dined al fresco. We looked up suddenly when we heard cheering.   Walking by was the orchestra, led by the conductor, who was shouting and gesturing something in Italian. I could only make out the words  “Bravo!  Bravo!”  The orchestra  passed the tables, and as they did, with the ruins of the amphitheater behind them,  everyone would break out in cheers and  begin to clap. It was like  a mini-parade, except the participants had just gotten done playing exquisite music and were carrying glasses of wine that they raised in toast in the warm midnight air. 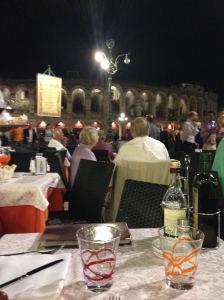 We stayed at Hotel Aurora, which is right above Piazza Erbe.  It is a wonderful bed and breakfast place, where you can go out to a sunny balcony overlooking the piazza for breakfast, afternoon drinks and snacks and just to relax. The staff is friendly and helpful and it felt like home. Verona is a beautiful city, and it makes for a great stop on any tour of Italy. 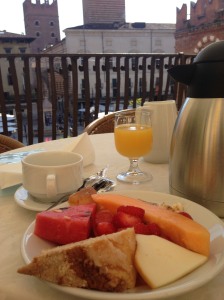